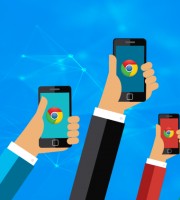 There is something astounding in the Wall Street Journals which awaits people and making them awe-struck. The journal reports that Google is exploring ways to merge Chrome OS with Android and looking for a major progress in the near future. Since the current CEO of Google Sundar Pichai became the director of both Chrome OS and Android in March 2013, people have come out with assumptions that if Google would merge its Android and Chrome OS and the company would consistently provide them with important and distinct pieces of its strategy.

The WSJ further states that the Google is into it since last two years and trying its best to fold Chrome OS and Android together. This amalgamation indicates the compatibility of the new version of Android which will run on laptops and desktop computers, though the company has not clearly revealed whether they are aiming the Windows and Mac computers or just a rebranded extension of the current Chromebook lineup. Thus it is entirely planned to give users the access to services and systems familiar to mobile users.

Chrome OS, with its peculiarity and magnetism, is very much a niche product and Android being a dominant operating system, leading the mobile market and this might be the practical reason behind Google’s attempt to combine the two together. This new effective move of Google marks its effort to reduce the number of independent platforms that it maintains.

The verge of this surprising move confirms the success of Chromebooks and a low cost computer options. The big unveil of this new operating system, amalgamation of both Chrome OS and Android is likely to be demonstrated at Google I/O and happen sometime in 2017. Thus, the Google’s investment on its preferred vernacular i.e. the convertible Android Laptop called the Pixel C can be seen as an early sign of what next is yet to come.